Many researchers have illustrated the difficulties and challenges that children and adults face with formal and informal reasoning. Convince Me was a "reasoner's workbench" computer program to help students structure, restructure, and assess their knowledge about often controversial situations. 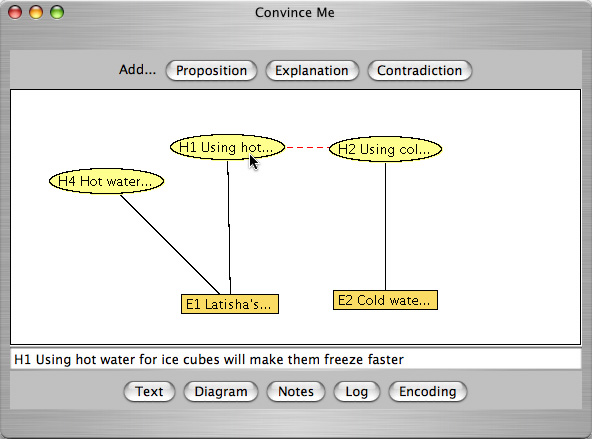 Convince Me guided people to cyclically (1) categorize their own propositions as either evidence or hypotheses, (2) indicatethe reliability of their various evidence, (3) connect their propositions with both explanatory and contradictory / competitivelinks, and (4) rate each proposition's believability. After each (1-4) cycle, users can elicit feedback from a connectionist model, called ECHO, to help improve the coherence of their arguments.

Studies suggest that although the distinguishing characteristics of data and theory are vague--even for experts who study scientific reasoning professionally--Convince Me lent a sophistication to novices' discriminative criteria across contexts, making their epistemic categorizations more expert-like both during, and after, its use.

The Theory of Explanatory Coherence (TEC) and its associated connectionist model, ECHO, offers an account of how people decide the plausibility of beliefs asserted in an explanation or argument (Ranney & Thagard, 1988; Thagard, 1989).

TEC includes several prominent principles of explanatory coherence, such as parsimony, contradiction, explanatory symmetry, data priority, and system coherence. ECHO implements TEC in a constraint-satisfying, connectionist program. The model passes activation--the "currency of believability"--among evidential and hypothetical propositions (nodes in a network) such that propositions that eventually exhibit high activationmay be regarded as accepted, while propositions with low activation may be thought of as rejected.

We found that ECHO usefully predicts how people evaluate hypotheses, evidence, and other propositions regarding various situations.

Convince Me is a Java program for generating and analyzing arguments. Convince Me uses a connectionist model, called ECHO (see above), to provide feedback on the coherence of the arguments entered into the application. Convince Me source is on SourceForge, available under the GNU Public License. Convince Me is licensed for evaluation purposes only and comes with no warranty or support. Download the sample ice cubes argument to try it out. In Convince Me, choose Open Argument from the File menu, and select the file named "icecubes.xml".

The following are sample materials used with students.